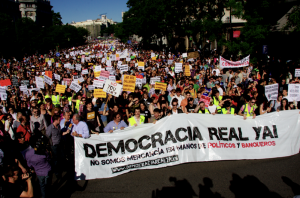 Join the Washtenaw Community Action Team for a community forum:

Update: Due to the Art Fair taking place on nearby streets, you may need some extra time to get to the LEO office as some streets may be closed off and/or more crowded than usual. More info on parking during the Art Fair.

An informal, public discussion with Andrés Villena, a Spanish activist and academic currently visiting Ann Arbor from Spain, about the current economic crisis in Spain and the rest of Europe, and about the ongoing social movements in Spain that have sprung up in response to the crisis.

About the speaker: Andrés Villena Oliver (born 1980) studied Political Science, Sociology and Economics, and currently teaches Sociology at the University of Málaga, Spain. He has also worked as an editor in different political digital newspapers in Spain, and currently writes political columns in Spanish for the Diario Público newspaper.

Andrés has written and/or co-authored several books and articles, including one on the 15-M movement and its future. (The 2011–2012 Spanish protests, variously called the 15-M Movement and the “Indignants'” movement (“movimiento de los indignados”) have been demanding radical social change, somewhat similarly to the Occupy movement in the U.S.)