WCAT members believe in international labor solidarity. Working with other labor, community and Latin American solidarity organizations throughout Michigan, WCAT has supported the Association of Injured Workers and Ex-Workers of General Motors Colombia ASOTRECOL. ASOTRECOL consists of “200 GM assembly plant workers in Bogotá, Colombia, who were injured and forced out of their jobs. Suffering from musculoskeletal problems, herniated discs, carpal tunnel, elbow, and shoulder injuries, a group of them has camped outside the U.S. Embassy for more than a year, calling their organization ASOTRECOL, the Association of Injured Workers and Ex-workers of GM Colombia.” (Labor Notes: Colombian Hunger Strikers Sew Lips Back Shut, by Jane Slaughter, 9/5/12)

WCAT members have organized and participated in vigils at GM Headquarters in Detroit, and have hosted a successful fundraiser for ASOTRECOL. 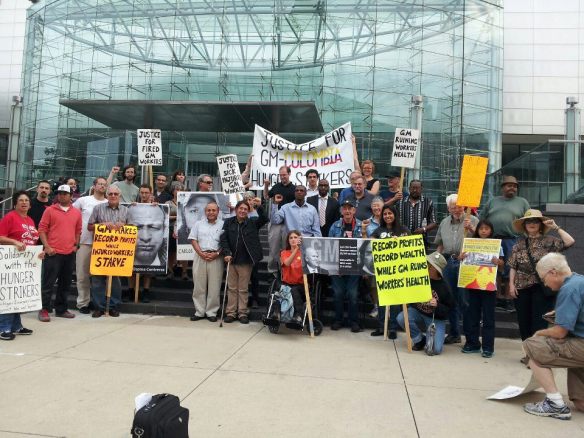